'Professional, yet warm and understanding’ are the words Grant Ross uses to describe himself. He has shown constant dedication with perpetual improvement through his studies and work placements. His strong work ethic and vibrant personality have allowed him to accumulate an extensive portfolio from multiple fields. He has experience in both commercial and residential sectors, as well as experience in graphic design and 3D furniture modelling.

Grant aims to use his valuable skills and experiences to further himself and ideally become internationally recognised in the design world. He aims to achieve this goal through maintaining a competitive edge, continually learning and improving the skills he already possesses. Grant understands that no great goals can be achieved by oneself, therefore his goal is to make an influential impact for the organisation he works for by further developing their design processes and illustrations. He can achieve this through the introduction of new programs or through extensive knowledge he can bring to the team.

As the famous Richard Branson once said, "If you get the right mix of people working for your company, it will have a far greater chance of success." Now is the time for greater success through hiring the right people, so that together we can achieve our goals. 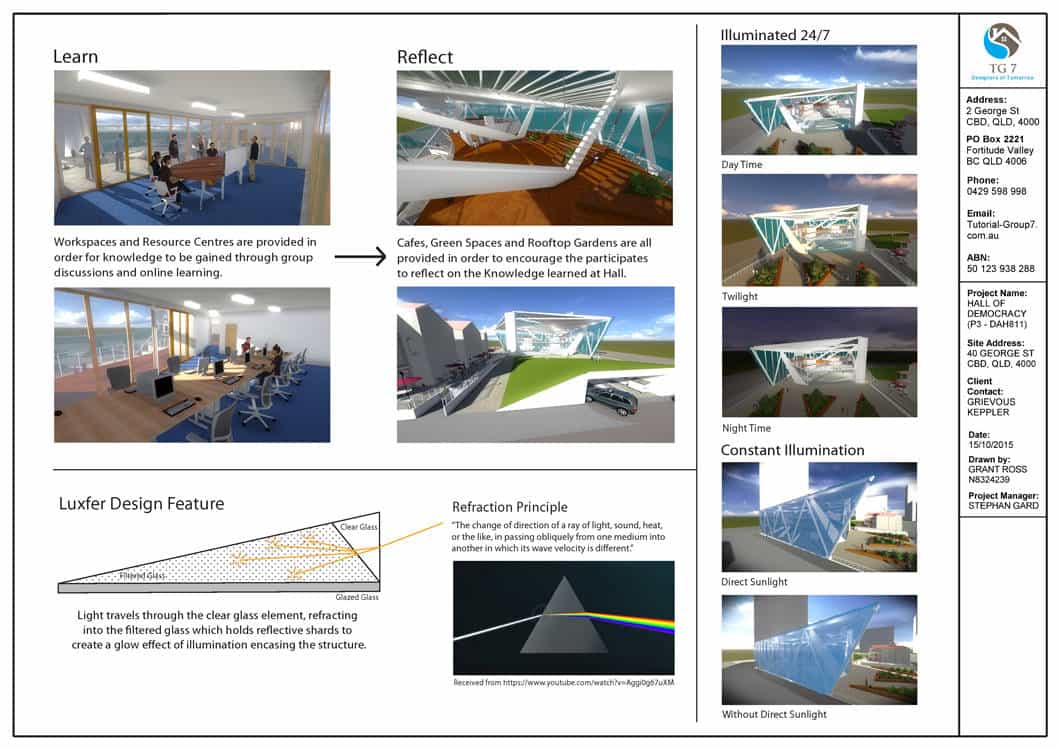 Urban is a commercial building design company that designs and constructs commercial offices and buildings. Grant joined the team in 2015 as a Draftsman and Secondary Illustrator. Following the main Illustrator's lead, Grant makes professional marketing boards and produces high-quality computer aided images and videos. Grant also has the necessary skill set to contribute to the Urban design team. His job includes support for all Interior and Building Designers, where he measures existing office blocks, initiates and completes the design before giving it to an interior designer. He also drafts BA's and ASBUILTS for the organisation's builders during and at the end of each job.

MR Designs & Drafting is a building design firm run by two building designers that undertake residential projects. Grant’s role is very similar to his role at Urban. He measures existing houses, initiates and completes the design, as well as drafting BAs and ASBUILTS. Grant also illustrates the residential buildings via either video or computer aided images.

DTS is a surveying and urban planning firm where Grant was hired as a Drafter in 2012. His job was to complete AutoCad drawings for the company’s Surveyors and Urban Planners.

Healthcraft is a business that provides customised and specialised furniture for disabled and elderly citizens to be used in either the workplace or home. The job description was to build over 50 customisable chairs and sofas in 3DSmax, Revit and Sketchup. This was carried out to advertise and provide designers and architects with free CAD furniture to use in BIM models. Grant, with his knowledge in the online marketing field and being familiar with managing social media platforms, implemented a marketing campaign to encourage the use of the CAD models.

Grant has always aimed to gain more skills and experience to improve in any given field he undertakes. He completed the business program “Youth Achievement Australia” in 2009, where his role was Managing Director of a small company Cyanamic. Utilising Grant’s competitive nature and his passion for business, the school company was placed runner up in three awards against twelve competing schools. These awards included Marketing Initiative and Company of the Year.

Grant was selected to attend 'Questacon 2010 Invention Convention' in Canberra, an Australian Government Program that provides skills and pointers on how to advertise and sell products in the national or international markets for young creative high school students.

Grant also completed Edgeware's ‘UPLOAD Young Entrepreneurs Camps' during 2012. This program teaches young adults how to stand out and gain the reputation that they desire within a large organisation.

Additionally, Grant attended 'Design Your Life Workshop' in 2013. The workshop was run by four successful entrepreneurs and inspirational speakers who outlined how to achieve both success and wellbeing in life.

Grant chose architecture over business when entering into Tertiary Studies because he realised that his interest in business studies could be applied to any expertise. With his creative nature, love of being competitive, and by excelling in the Graphics subject and receiving the Applied Technology Subject Award in high school, Grant realised that he needed to follow his passion for Architecture.

Grant initially became a tutor of high school mathematics during his first year of University, then teaching both Primary and Secondary students of all years throughout his university studies. In the later years of his Bachelor degree, Grant tutored university students in design and illustration skills, as well as programs including Revit, Photoshop, Illustrator and Lumion.

At the encouragement of his warm-hearted family, Grant has been deeply involved in community service and plans to continue to do so in the future. Grant shared his spare time volunteering at the Wesley Hospital in 2013 and 2014, assisting the elderly around the hospital and comforting them by providing friendly support and care.

Grant also donates blood every 3 months, having started doing so in his teenage years.

Grant has also volunteered and brought utmost happiness to children when he has participated in community events like “Christmas 4 Kids” at Unidas Community Centre and “Goals for Grace” held at Peter Lightfoot Oval.